Arriving at the museum, and my sister captures my pure and utter bliss of this moment.

I went to visit my sister in Germany, as a close to my amazing Italian adventure, the one where I spent six weeks at the Scuola Internazionale di Graficia. And my sister kindly asked me what I hoped to do while visiting. Without missing a beat, I told her I wanted to visit Johannes Gutenberg’s birthplace, Mainz, Germany. And when I am immediately decisive about something, I know I must do it. Like the true first born and mother of four children that she is, my sister flawlessly booked us tickets, made hotel reservations and did a little research to get us ready for our mini-adventure–six hours on the train both directions for less than 24 hours in Gutenberg’s hometown, and every second was worth it.

The main Mainz attraction is the Gutenberg museum. Once we dropped our bags at our hotel, we headed straight for this version of printing mecca. One of the highlights of the museum are two original 42-line Gutenberg Bibles, opened to the same page so the viewer can compare the difference in ornamentation by the scribe. These are stored in a vault along with a number of other 500+ year old manuscripts. (Technically, photos here are not allowed, but that little Moleskin notebook is roughly the same size as an iPhone, and serves as an easy cover for stealth pics in serious situations like this one–so please excuse the quality.)

One of my favorites, besides the Gutenberg Bibles, was a tiny little Book of Hours hand-written with “pearl letters” a style of handwriting where the letters were written small and close together like tightly strung pearls.

The other heart-beating highlights of the museum were

The other highlight of Mainz, are the Marc Chagall windows in Saint Stephen’s Church. The church was originally built in 990 AD on the highest hill in town. The church was heavily damaged during WWII, but rebuilt. Chagall created nine stained glass windows using his characteristic blue between 1978 and his death in 1985. We arrived right at 10 am when the church opened–I drew and wrote in the morning blue light listening to the organist go through his morning practice. A great way to end this special time. 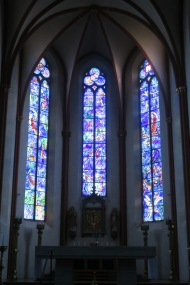 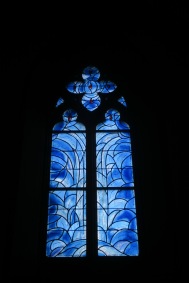