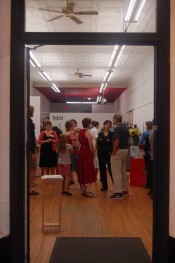 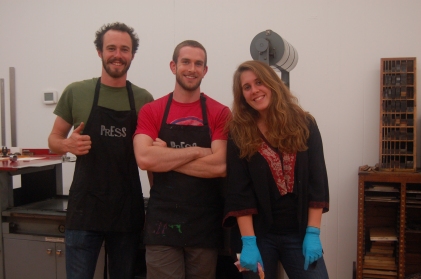 We had our opening for our Double Bubble Print Portfolio exhibitition last night, and it was a raging success. Many visitors came to look at the prints created and exchanged by the eighteen local artist who made up the work. Nine of the artist came to the opening, including curators Sarah Pike and Denise Saint-Onge. The interesting aspect of this exhibition is that many of these artists haven’t met each other until last night, proving that art can bring people together. The other, who brought friends and family with them, were Adelie Sugarman, Bill Skerritt, Valerie Carrigan, Joan Dix Blair, Thorsten Dennerline, Nathan Meltz and  Leona Christie.

Melanie was away for this opening, leaving current intern Jonas, previous (and first!) intern Jason, and volunteer Michaela to take care of the night. The whole gang took turns printing, providing food (featuring Melanie’s chocolate chip-zucchini cake), and chatting up with guests. Jonas and Jason closed up the night doing their best Printer’s Gothic in the doorway. Jonas held a composing stick, while Jason held a long T-square. Both were trying to hold back giggles.

The monthly mantra card features a raven saying, “Connect,” along with various other words on the card. The viewer is meant to find the relationship between the words, just like the invisible strings that link the artwork and the artists in the exhibition themselves with each other. Is it geographical? Is it medium? See the exhibition, up all month until the 21st of September, and create associations of your own.

*Update* It should be mentioned that the night wouldn’t be possible without the hard work from Nicole. Although she is no longer at PRESS, her prep work before she left made the week so much easier. Thanks Nicole! Also, just because Melanie wasn’t there on opening night, it doesn’t mean that she didn’t work hard right before she left on vacation. And finally, a huge thanks to MCLA, the Berkshire Cultural Resource Center, and DownStreet Art for making the night, and every opening, possible.