Mary Tasillo, is a book, print, text, and paper artist based in Philadelphia, PA. She is also a teacher, writer, and independent scholar. She balances limited edition work with the democratic multiple to ensure the broadest possible audience. She visited PRESS this past week to print the cover of her latest Book Bomb Horizontalidad. 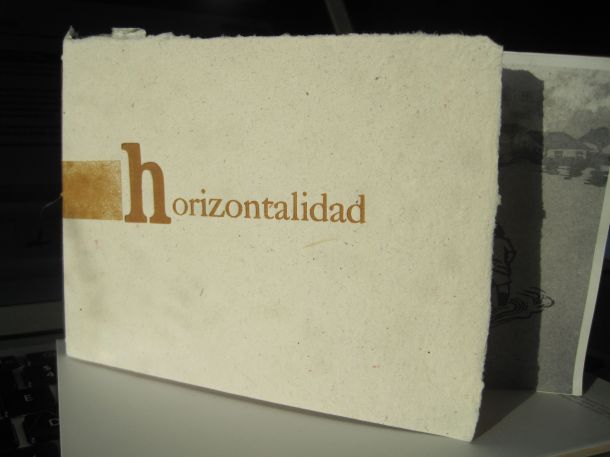 The colophon reads: Book Bombs Zine #6 was completed in October 2011, concurrent with Occupy Wallstreet and the Occupy Together actions across the country, in conjunction with the Friends of the Dard Hunter Annual Meetings. It’s a great book that shows ways Horizontalidad is happening in America. We learn in the zine that Horizontalidad is from Argentina, “a word that arose from autonomous movements , indicating a lack of hierachy and a level playing field, it was a practive of decentralizing supremacy and self-organization, where all participants were part of the decision-making processes.” Sounds a lot like the Occupy movement, doesn’t it.

We at PRESS printed her cover, and Peter Hopkins at the Crane Museum of Papermaking made the interior printing possible on some of that fabulous 100% cotton Crane paper. We have a couple of copies of the zine at PRESS right now. Stop by to get a look!

PRESS also took a stab at an Occupy poster. Gallery attendant Emily Breunig took some down to Wall Street yesterday, and some were handed out in North Adams today. Maybe you got a copy?