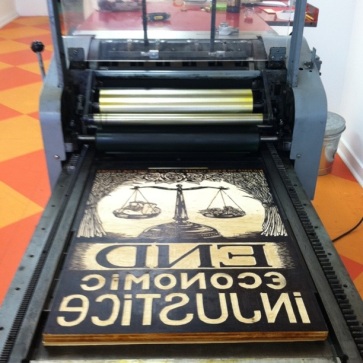 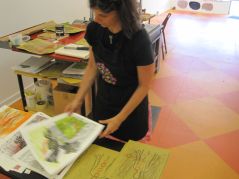 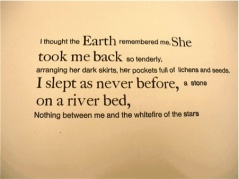 It seems that the amount of work getting done on the press has increased exponentially as we near the end of the summer. And as every new print sits with fresh ink on the red table still in the grabbers, more and more inspiration flies like newly released electricity within the space. New ideas have been coming to new and old learners alike at an astonishing rate these past few weeks; from Melanie blasting out prints by using the run cycle on the Vandercook to Karen Arp-Sandel discovering the immense glory of innovative typeface setting, Emily Cohane carving out her 18×24 inch woodcuts of North Adams and the social commentary of “End Economic Injustice” to all the new work that will be included in the upcoming show “This One Goes To Eleven”.

In the midst of all the printing and creating at PRESS, we recently came across this poem entitled “Magic Words”. The poem is of Eskimo origin, and we wanted to share it with you too. It struck us as a very powerful reminder as to what true potential lay within words. No matter if printed, written, or spoken; words move and words change just as the leaden typeface that we set  does when preparing the text and words for a new letterpress project. Use the words as you will, and move the words as you may.

Without further a due:

In the very earliest time,

when both people and animals lived on earth,

a person could become an animal if he wanted to

and an animal could become a human being.

Sometimes the were people

and there was no difference.

All spoke he same language.

That was the time when words were like magic.

The human mind had mysterious powers.

a word spoken by chance

It would suddenly come alive

and what people wanted to happen could happen-

all you had to do was say it.

Nobody can explain this;

That’s the way it was.

So when you get a chance, come on down to see exactly how much magic there is in letterpress printing. And let us know if this poem made you think about your craft in an enlightening perspective as it did for us.